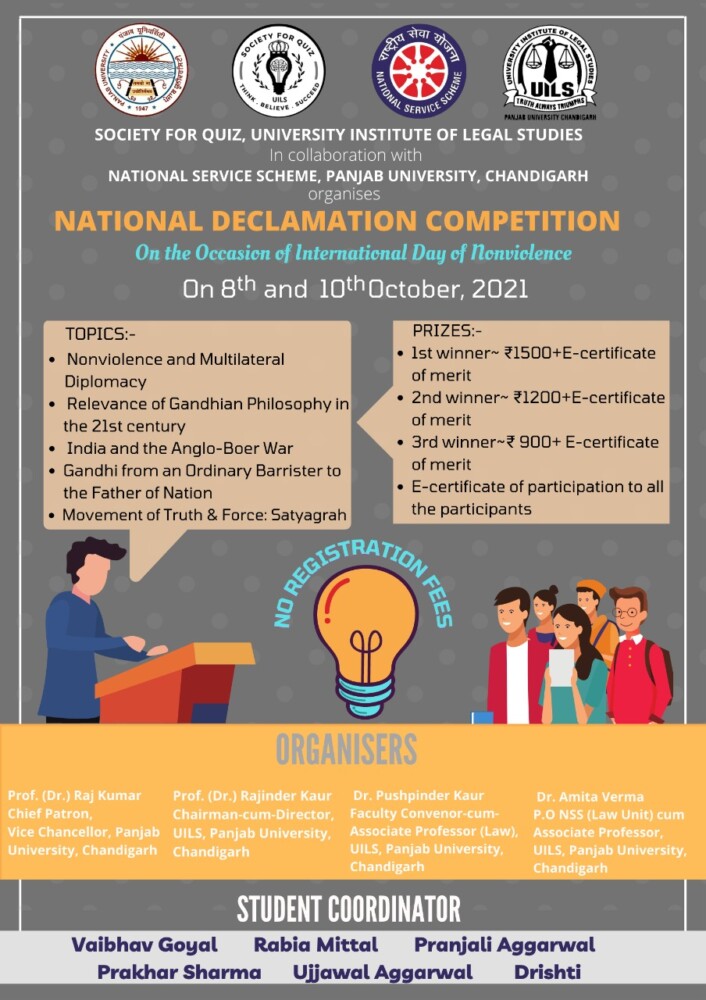 The Society for Quiz is a constituent society of the University Institute of Legal Studies, Panjab University, Chandigarh. The Society owes its existence to the vital role played by the quizzes in the learning process. Considering how promising the quizzes are in terms of expanding the horizons of one’s knowledge and improving the efficiency of mind, the Society is completely devoted to organizing various types of quizzes throughout the year, both online and offline.

Also, to keep the spirit of competition alive, the Society aims not to limit itself to its home institution but also to reach out to the students throughout the nation. Furthermore, believing in the potential of a quiz as an activity to raise general awareness, the Society is also unrestricted in its choice of topics for the quizzes and is not limited merely to the topics of the law.

About the Quiz Competition

At present around 120 colleges of our University are implementing this scheme. Panjab University with 15 NSS units has been organizing various NSS activities in the PU Campuses and its 5 adopted villages falling in the UT Chandigarh and around 70 villages situated in the state of Punjab. Major achievements of the Panjab University NSS are implementation of NSS Elective subject in the undergraduate courses, PGI Assistance Project, 2nd position of NSS Contingent at State Level Parade, E-Waste Management Programme, and Digital Literacy Programme.

The motto of the NSS is: ‘NOT ME BUT YOU’. This reflects the essence of democratic living and upholds the need for selfless service and appreciation of the other person’s point of view.

Gandhi Jayanti is an event celebrated in India to mark the birthday of Mahatma Gandhi. It is celebrated annually on 2 October, and it is one of the three national holidays of India. The UN General Assembly announced on 15 June 2007 that it adopted a resolution which declared that 2 October will be celebrated as the International Day of Non-Violence.

Gandhi Jayanti is observed to honour and pay rich tributes to the Father of the Nation and on this day, people remember his invaluable contributions to India’s freedom struggle and independence movement. His path-breaking principles of ahimsa and swaraj are observed across all the institutions in India. People celebrate his teachings through various initiatives that can lead to the betterment of our surroundings, the city, and eventually the country.

The International Day of Non-Violence is observed on 2 October, the birthday of Mahatma Gandhi, leader of the Indian independence movement and pioneer of the philosophy and strategy of non-violence.

According to General Assembly resolution A/RES/61/271 of 15 June 2007, which established the commemoration, the International Day is an occasion to “disseminate the message of non-violence, including through education and public awareness”. The resolution reaffirms “the universal relevance of the principle of non-violence” and the desire “to secure a culture of peace, tolerance, understanding, and non-violence”.

Gandhi Jayanti is marked by prayer services and tributes all over India, including at Gandhi’s memorial, Raj Ghat, in New Delhi where he was cremated. Popular activities include prayer meetings, commemorative ceremonies in different cities by colleges, local government institutions, and socio-political institutions. Painting and essay competitions are conducted and best awards are granted for projects in schools and the community encouraging a nonviolent way of life as well as celebrating Gandhi’s effort in the Indian independence movement. Gandhi’s favourite Bhajan (Hindu devotional song), Raghupati Raghav Raja Ram, is usually sung in his memory. Statues of Mahatma Gandhi throughout the country are decorated with flowers and garlands, and some people avoid drinking alcohol or eating meat on the day.

The participants are free to choose their topic from the below-mentioned themes:

a) The language of the contest shall be English only.
b) The participants will speak on the topic with areas given on.
c) The speech will be of 5-7 minutes duration. The time limit will be strictly enforced. The first warning bell would be struck at the 5th minute. The final warning bell will be given 30 seconds before the 7th minute.
d) The speaker is expected to memorize their speech and is not allowed to read any part of the speech from papers, notes, or cards.

B. The contestants may keep in view the following points while delivering their speech:

General rules of marking are as per the following criteria out of the marks allocated against each category:

Kindly mail your queries at uilsnonviolenceday@gmail.com

University Institute of Legal Studies (UILS) was established as the constituent department of Panjab University, in the academic session 2004-05. During a short period, it has emerged as one of the premier legal Institutes in the country with a unique blend of tradition and modernity. Students are trained in the essence of the substantive laws, techniques of procedural laws, methods of client counselling, and skills in legal and social sciences research, etc. The Moot Court Competitions, Client Counselling Sessions, Quiz Contests, Seminars, Group Discussions, and Extension Lectures, etc. are regular features of the academic calendar of the Institute. The Institute’s Legal Aid Clinic, which provides free legal services to the economically weaker sections of the society as a part of the community outreach program of the Institute, also offers opportunities to the students to work in coordination with practising lawyers.